April 1, 2019—“Tokyo’s approach to military power”—restraining its own use of force and relying on the United States for security—“is being tested,” writes Council on Foreign Relations Senior Fellow for Japan Studies Sheila A. Smith. “The reliability of the United States, more than the military capabilities of its neighbors, will in the end decide the future of Japan’s approach to military power.”

“Deterring war rather than waging it has become the purpose of Japan’s military power,” explains Smith in her new book, Japan Rearmed: The Politics of Military Power. Japan’s pacifist postwar constitution renounced “the use of force as a means of settling international disputes,” and Japan’s military—the Self-Defense Force (SDF)—“continues to be dedicated to an exclusively defensive mission.” Allying with the United States “has provided strategic protection for Japan, deterring its nuclear neighbors with America’s nuclear umbrella.” 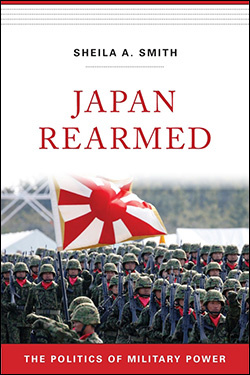 However, in response to calls from Washington for greater Japanese participation in collective security, “Japan’s military has come out of the domestic shadows and into the international spotlight, making it an increasingly cosmopolitan arm of the Japanese state,” writes Smith. “Whether under UN auspices or led by the United States, Japan’s military has gained experience in a variety of international coalition opportunities, including peacekeeping, postconflict reconstruction, disaster relief, and maritime coalition operations.”

Japanese leaders “understand that it is not in their best interest to limit their military as others invest in their own,” Smith writes, and “the growing military power of China and North Korea create pressures on Japan’s defenses.” With North Korea’s nuclear ambitions and China’s increasingly assertive maritime activities, Northeast Asia has become a more contested region where the SDF “now regularly runs up against the expanding armed forces of its neighbors.”

“As American political leaders openly debate their commitment to allied defenses, Japanese politicians are beginning to argue for greater military capabilities,” Smith writes, “including limited strike capability, to ensure potential adversaries do not miscalculate SDF readiness.” Smith identifies three crisis scenarios that could prompt Tokyo to move in this direction:

A missile launch by North Korea. Such a launch could strike Japanese territory, “revealing the inability of [U.S.] ballistic missile defense to ensure Japanese security.”

A failure of the U.S.-Japan alliance in a crisis, whereby “Washington might sit on the sidelines, or worse yet, advocate against Japanese interests.”

“Japanese leaders today value their military as an instrument of national policy and are far more willing to use this instrument as a means of Japan’s contribution to global security challenges than in the past,” Smith concludes.

“At a time when the East Asian security environment is becoming ever more dangerous and unpredictable, Sheila Smith offers a timely guide to the choices facing Japan. This is an insightful and indispensable look at the evolution of Japan’s approach to national security and the consequential decisions it will face in the future.”—James Steinberg, Syracuse University

“After fighting a series of aggressive wars in the early twentieth century, Japan retreated from power politics and has remained reluctant to develop a military capability that matches its economic power. Will this change? The paradoxical transition from militarist aggression to pacifism and isolationism has been discussed before, but never with the clarity Sheila Smith displays in this important book. She shows that Japan will have some critical choices to make to maintain its security in the challenging geopolitics of the twenty-first century.”—Kiichi Fujiwara, University of Tokyo

“With keen insight and scholarly precision, Smith tells us why the Japanese public’s evolving attitude toward the use of military force is important to American security and the peace of northeast Asia. A must-read for U.S. policymakers responsible for Asia.”—J. Thomas Schieffer, Former U.S. Ambassador to Japan

“Smith masterfully traces the interplay of Japan’s military heritage, politics, national sentiment, threats, and alliance with the United States in the formation and development of the Self-Defense Force. Even experts will find new information and insights in her account. As she makes clear, the SDF is a work in progress, and this book provides a welcome guide to its possible future path.”—Admiral Dennis Blair, U.S. Navy (Ret.), Former Commander-in-Chief, U.S. Pacific Command