Blog Post
Blog posts represent the views of CFR fellows and staff and not those of CFR, which takes no institutional positions. 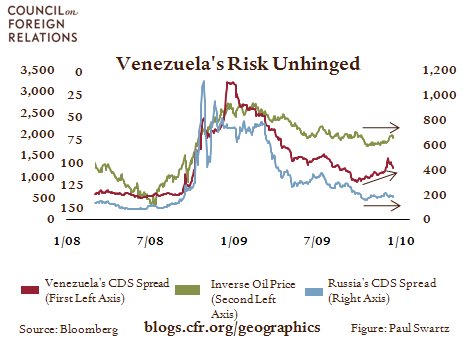 The credit risk of oil exporting countries such as Venezuela and Russia tends to move with the price of oil. As a country’s oil export revenue improves, so does its ability to pay its debts. Recently, however, Venezuela’s CDS spreads have increased even while the price of oil has been stable. The market’s perception of an increased risk of default coincides with the Venezuelan government’s move to close banks representing 8% of the country’s deposits. On Tuesday December 15th the Venezuelan National Assembly passed a law increasing depositors’ insurance in an effort to prevent a run on the banks. Problems in the financial sector have become the primary driver of Venezuelan sovereign credit risk.

Can we ask you something?
For a chance to win a digital subscription to Foreign Affairs, please take this two-minute survey to help us improve our site.
No Thanks
Yes, I’ll Give Feedback